Coughing And Gagging In Dogs: Causes And Treatments 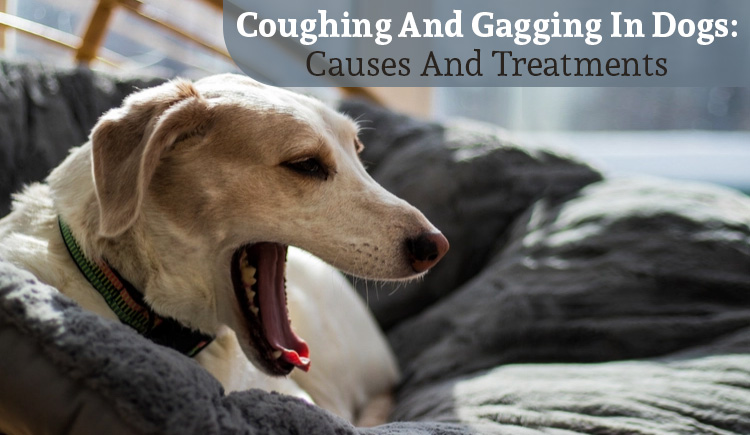 Coughing in dogs is not a rare condition; almost each and every dog will experience/have experienced coughing in his/her lifetime. But often dog parents take the coughing casually and administer cough suppressants straightaway.

However, that is not the correct approach because coughing can be a symptom of an underlying dangerous disease which if ignored, can cause some serious repercussions.

Therefore, it is important to know the possible causes behind coughing so that you can talk to your vet and avert any possible threat to your pooch’s health.

Causes of Coughing in Old Dogs

The windpipe is generally hard and inflexible but sometimes as your dog ages, the windpipe cartilage becomes soft. As a result, windpipe with soft cartilage becomes oval in shape or can even collapse while breathing. This leads to several issues in dogs and coughing is one of them. This can be a stressful and painful situation for your furry pal and we can only imagine that.

Your pooch will then try to breathe more but that attempt will only exert more pressure on the misshaped or collapsed windpipe. These things lead to airway irritation which in turn leads to harsh cough and further irritation.

Bronchomalacia is almost similar to tracheal collapse but it happens in the smaller airways of the chest. It is crucial for you to know about the disease and the cough caused by it, as it is often confused with heart failure.

Treatments for both of the above- mentioned disease is not easy. Surgery in most cases is avoided and your vet can try one of them or a combination of the below-given methods :

Heart problems can cause cough in two ways.

Heart enlargement causes the airways above the heart to compress. This especially happens if there is also bronchomalacia.

Pulmonary oedema causes cough reflex stimulation because of the fluid accumulation in the lungs. In these cases, the cough reflex happens mostly at night.

Bronchitis is another culprit disease that can harm your pooch and cause discomfort. Also, it’s not unusual for your dog to be suffering from all of the three causes.

Bronchitis is mostly treated by antibiotics, prednisolone or both. Vets majorly use treatment trial method.

Laryngeal paralysis is a disease of senior dogs. The disease occurs in larger breed dogs and it gets worse with warm temperatures and exercise. The treatment of this disease is, unfortunately, surgery.

Causes of Coughing In Young Dogs

Infections are mostly the reasons behind coughing in younger dogs. Read below to know the reasons.

Giving anti-inflammatories drugs to reduce discomfort is the most popular way that most vets choose to treat kennel cough. The cough reflex becomes better and your furry companion can sleep peacefully. Vets also recommend antibiotics and cough suppressants in some cases.

Inhaling foreign materials is also one of the major reasons behind coughing and irritation. While your dog can inhale anything, the below given 2 scenarios are mostly observed by the vets.

Aspiration pneumonia is caused when your pooch accidentally inhales food into the lungs. These sorts of dogs are likely to suffer from laryngeal paralysis or megaoesophagus.

Aspiration pneumonia is a lot easier to spot in X- rays diagnosis because of their characteristic appearance. However, grass seeds are difficult to spot and diagnose, and it requires vets to be more suspicious for them to diagnose further. Hence as a dog parent, it is better to inform your vet about each and everything that is in and around your house.

Heartworms was the most common cause of sudden and unexplained coughing till the late 1990s. Heartworms develop and show no signs mostly in 4-5 months of their growth in your pooch. It’s only when they start blocking the heart veins and disrupt the blood flow the symptoms are observed. Coughing is one of the symptoms that your dog might show and this can be prevented by preventing heartworms in the early and immature stages. Thus, usage of good heartworms preventives saves your pooch from this type of unexplained coughing.

Unlike humans, dogs very rarely suffer from lung infections mainly because dogs don’t get flu or human cold. Also, dogs have horizontally positioned lungs and hence it is a lot easier to cough things up. However, occasional unexplained pneumonia cases are seen by vets that, if treated instantly, pose not much of a serious threat to your pooch and your pup can make full recovery.

How To Treat A Dog With Cough

Never just blandly give cough suppressants without consulting your vet if your dog is coughing too much. You might tend to see it as a common health condition and by giving cough suppressant without the diagnosis can worsen the disease, of which the coughing is a symptom.

Contact your vet and find the reason behind the cough and treat the cause rather than treating the symptom.

Proper diagnosis will help you reach the actual cause behind the cough and you can cure your furry little pooch and give him/her the peace he/she is craving for.